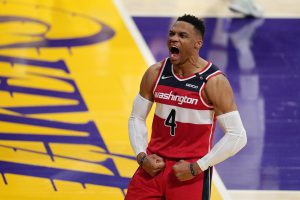 On the surface, it is a great trade for the Lakers because they add one of the best point guards of this generation and the only player to average a triple double for a season in NBA history. In reality however, Westbrook and the Lakers may not be a great fit.

The Lakers needed shooters who can space the floor and create lanes for LeBron and Anthony Davis to drive to the basket. Instead, they add a player who also attacks the basket himself and has shot 30% from three point land for his career. Needless to say, teams will clog the paint and force Westbrook to kick it out to guys who can’t shoot threes.

Part of the reason they can’t shoot threes is the Lakers traded away their two best three point shooters in the deal in Kuzma and KCP. Unless the Lakers can find a way to add some shooters, which will be hard due to Westbrook’s contract, then they will be a one dimensional offense.

From a fantasy standpoint, Lebron and AD should remain top five pick options and produce at the level we’re accustomed to. Injuries are always the biggest question mark with them. Westbrook’s numbers could decline a little but he’s still a top 20 ADP player.

The Lakers will be fine in fantasy. The problem is, they might not be fine in reality if they don’t find a way to space the floor.