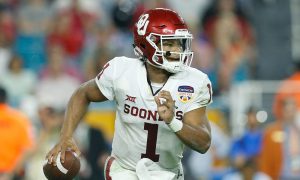 Kyler Murray still projects as the number one pick despite the rumors that the Cardinals May draft Quinnen Williams.

1. Arizona Cardinals: Kyler Murray, QB, Oklahoma: Murray and Kingsbury is the perfect as the Cardinals get their franchise quarterback.

2. San Francisco 49ers: Nick Bosa, DE, Ohio State: Bosa will pair up with Dee Ford to give the Niners one of the best edge rushing tandems in the NFL.

3. New York Jets: Quinnen Williams, DT, Alabama: The Jets want to trade down but if they don’t, they will draft the best player available and that’s Williams.

5. Tampa Bay Bucs: Devin White, ILB, LSU: White is an upgrade over Kwon Alexander in the middle of the Bucs defense.

6. New York Giants: Josh Allen, EDGE, Kentucky: Allen is the best pure pass rusher in this draft. He will make an impact from day one.

7. Jacksonville Jaguars: Jonah Williams, OT, Alabama: The Jaguars could go in a myriad of directions with this pick but they’ll go with the safest lineman pick in this draft and take Williams.

8. Detroit Lions: Brian Burns, DE, Florida State: Burns has been climbing up teams boards because he is a pure five technique defensive end who can play in a three point stance and make a difference.

9. Buffalo Bills: Jawaan Taylor, OT, Florida: The Bills never ending quest to rebuild continues with Taylor who is one of the best run blockers in this draft.

11. Cincinnati Bengals: Devin Bush, Michigan, ILB: Bush is rising up teams boards because of his athleticism and versatility.

12. Green Bay Packers: Andre Dillard, OT, Washington: Dillard is a pure left tackle. He is athletic, fundamentally sound and has the potential to be a long time pro bowler.

13. Miami Dolphins: Drew Lock, QB, Mizzou: The Dolphins could go in a myriad of directions here but opt to take their quarterback of the future in the talented Lock.

14. Atlanta Falcons: Cody Ford, OG, Oklahoma: The Falcons need to upgrade the interior of their offensive line. Ford is an absolute road grader who moves people in the run game.

15. Washington Redskins: Dwayne Haskins, QB, Ohio State: It is no secret the Redskins want a quarterback. If they stand pat, they will get Haskins.

16. Carolina Panthers: Christian Wilkins, DT, Clemson: Wilkins is too talented a player and too good a character guy for the Panthers to pass up here. They have seen plenty of Wilkins in their backyard. They know how good he is.

18. Minnesota Vikings: Chris Lindstrom, OG, Boston College: Lindstrom started the draft process projecting as a third round pick. Now he is one of the five best lineman in this draft and hoes to the Vikings at 18.

19. Tennessee Titans: Marquise Brown, WR, Oklahoma: Brown’s injury history aside, he is too good a talent to pass up in the first round. The Titans need play makers and Brown will fit the bill once he’s healthy.

20. Pittsburgh Steelers: Rock Ya Sin, CB, Temple: Nothing flashy about Ya Sin. He is just a good, fundamental football player.

21. Seattle Seahawks: Rashaun Gary, DE, Michigan: Gary falls and lands in the laps of the Seahawks who are looking to replace the recently traded Frank Clark.

22. Baltimore Ravens: Montez Sweat, EDGE, Miss St. Heart problems have scared some teams away from Sweat. The talent and off the charts athleticism are going to be too much for the Ravens to pass up.

23. Houston Texans: Noah Fant, TE, Iowa: Fant would be a great complement to DeAndre Hopkins inside the numbers. He will create match ups for Bill O’Brien in the Texans passing game.

24. Oakland Raiders: Josh Jacobs, RB, Alabama: With Marshawn Lynch stepping away from football, the Raiders need a back. They love Jacobs and they are going to get him in this spot.

26. Indianapolis Colts, Jeffery Simmons, DT, Miss St: A checkered past and a knee injury have hurt Simmons draft stock but he is still a top five talent and he still goes in the first round.

27. Oakland Raiders: Byron Murphy, CB, Washington: The Raiders need to upgrade their secondary. Murphy has the ball skills and make up speed to be an impact player as a rookie.

28. Los Angeles Chargers: Joejuan Williams, CB, Vanderbilt: Williams is as steady as they come in this draft. You need cornerback depth in the AFC if you want to contend. Williams would give the Chargers that.

29. Seattle Seahawks: Darnell Savage, S, Maryland: Savage has flown up teams boards since the Senior Bowl. He was a highly productive player at Maryland. His versatility and physicality make him an appealing prospect. A great value st this point in the draft.

30. Green Bay Packers: A.J Brown, WR, Ole Miss: The Packers receiving was once a strength. Now they need to find a starter opposite Davonte Adams. They do in Brown.

31. Los Angeles Rams: Dexter Lawrence, DT, Clemson: Ndamukong Suh’s replacement. Lawrence isn’t as explosive as Suh but bigger and stronger at the point of attack against the run.

32. New England Patriots: Greedy Williams, CB, LSU: Belichick’s willingness to stay patient will result in a top ten prospect who has slipped falling to his lap.