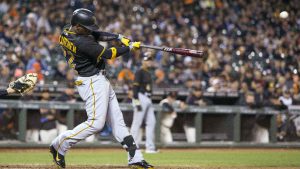 The 31 year old McCutchen is coming off of a nice bounce back season in 2017. He hit .279 with 28 home runs, 88 RBI’s and had an OPS of .849. While he may not be the player he was three or four years ago, McCutchen is still a top 25 outfielder and  should continue to produce at a relatively high level.

The move from PNC Park to AT&T Park shouldn’t effect him too much because both parks are pitcher parks. That’s not to say that McCuthen will hit 28 home runs again. That will depend on where he is hitting in the Giants line-up. If he is hitting at the top of the order, his run production will suffer a little. If he is hitting 3rd, clean-up or 5th, he could produce at the same level he did last season.

Either way, I don’t expect much of a drop off in production for McCutchen. He will fit in well with the newly revamped Giants line-up. As far as where to draft him, that will depend on the number of teams in your league. The target rounds should be rounds 8 to 12. Taking him in round eight might be high but rounds ten to twelve are certainly rounds you should entertain taking him in.

AT&T Park has been tough on left handed hitters through the years but righties have fared well. That is why Evan Longoria and McCutchen should be able to maintain their career averages across the board with the Giants. Getting a player like McCutchen who is still producing at a high level was a shrewd move by Giants GM Bobby Evans.