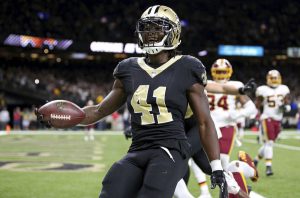 Alvin Kamara had an impressive rookie debut scoring 14 touchdowns on the season.

With the NFL regular over, it is time to reflect on the season that was from a fantasy standpoint. Here are some thoughts on the 2017 fantasy football season and what we can look forward to next season.

1. The 2017 season was truly the year of the running back. Aside from the injury to David Johnson and the suspension of Ezekiel Elliott, the other elite backs in the league lived up to the hype. Todd Gurley, LeVeon Bell, Melvin Gordon, Jordan Howard and Mark Ingram all put up huge fantasy numbers. Rookies Kareem Hunt and Alvin Kamara had monster debuts scoring a combined 22 touchdowns between the two of them. Add fellow rookies Leonard Fournette, Christian McCaffery and Dalvin Cook to the list and the running back position is well stocked heading into 2018.

These backs could provide good value in the middle rounds as second running backs or flex players.

3. The injury to Aaron Rodgers had a ripple effect because it not only hurt his owners, it also hurt the owners of Jordy Nelson, Davante Adams and Randall Cobb. With the exception of Adams, the rest of the Packers receiving corp really struggled without Rodgers and it showed.

4. The running back position got all the hype this past season and rightfully so, but there were several quarterback performance worthy of mentioning as well. Carson Wentz and Russell Wilson played at an MVP level all season long in fantasy and in reality. Both quarterbacks will be among the first quarterbacks taken in drafts next summer. Deshaun Watson and Jimmy Garoppolo both have bright futures and will provide tremendous middle round value.

5. There were also several quarterbacks that disappointed in 2017. Jameis Winston and Marcus Mariota both regressed and did not deliver as expected. Matt Ryan had a huge season in 2016 but was average in 2017. Joe Flacco, Eli Manning and Andy Dalton all cost fantasy owners dearly. As good as the young quarterbacks are in this league, many of the veteran quarterbacks are not worth drafting in 2018.

6. Tom Brady, Ben Roethlisberger and Phillip Rivers all bounced back and put up big numbers in 2017 but it might be time to put these three guys out to pasture in fantasy, particularity Big Ben and P-Riv.

7. Antonio Brown put up his usual big numbers and validated his status as the best receiver in football but many of the other big names at the position were non-factors in 2017. Odell Beckham Jr was hurt. Julio Jones battled some injuries and an inconsistent Matt Ryan. Mike Evans and A.J Green failed to meet production expectations and cost owners dearly.

The good news. There are several receivers that put up big numbers in 2017 that could be drafted as number one receivers next season. DeAndre Hopkins, Keenan Allen, Michael Thomas, Doug Baldwin and Davante Adams are all receivers who you can justify drafting late in the first round or in the second round. All five put up WR1 numbers this season.

8. Travis Kelce, Rob Gronkowski and Zach Ertz all caught eight touchdown passes this past season. Based on people I have talked to, they stayed away from the tight end position in the first four rounds of last year’s drafts. However, after the numbers these three guys put up in 2017, expect tight ends to come off the board early again in 2018.

9. The Jacksonville Jaguars and Baltimore Ravens finished as the number one and two scoring defenses in fantasy in 2017. Jacksonville averaged 13.0 per game in standard scoring. Baltimore’s defense had five games in which they scored more than 20 points. Both defenses will be amongst the first taken in 2018 drafts.

10. I cannot believe I am going to say this but with so many good kickers in the NFL nowadays, you might not want to wait until the last couple of rounds of your draft to draft your kicker next season. Kickers such Greg Zuerlein, Will Lutz, Stephen Gostkowski, Justin Tucker and Harrison Butker all scored over 150 points this past season.