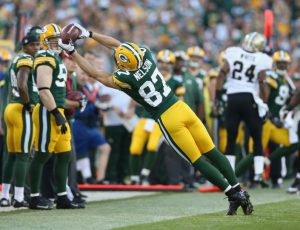 We are past the half way point of the 2017 fantasy football season. You know what that means? It is time to make a trade. You all know who want in trades, but who should you give up? If you have any of these guys, trade them now while you can. Their value will never be higher or lower.

1. Jordy Nelson, WR, Green Bay Packers: Nelson’s value has plummeted after the injury to Aaron Rodgers two weeks ago. Nelson only had one catch this past weekend against the Saints. It might be time to consider trading Nelson. You will have to take 50 cents on the dollar but you might want to move Nelson while he still has some value.

2. Chris Ivory, RB, Jacksonville Jaguars: Ivory has quietly put up good numbers as Leonard Fournette’s back up. With the Jags on bye this week and Fournette recovering from an ankle injury, now might be time to trade Ivory to Fournette’s owner. You could probably fill a bench need at another position with a deal.

3. Josh McCown, QB, New York Jets: If you were smart enough to grab McCown two weeks ago as a bye fill in, good for you. McCown has put quality numbers thus far this season and is starter worthy, especially in two quarterback leagues. McCown won’t net you a great return but if you are looking for a bye week fill in at running back or receiver, trade offer him up in a deal if you have him.

4. Joe Mixon, RB, Cincinnati Bengals: The Bengals are starting to give Mixon more touches. If you have depth at the running back position and are rostering Mixon, now would be a good time to up sell him and put him in any potential deals.

5. Amari Cooper, WR, Oakland Raiders: Sell, sell, sell!!! Cooper’s value will never be higher after last week’s performance against the Chiefs. Try to move him if you can. Outside of last week, Cooper has been a disappointment this season and last week’s performance might have been an outlier in what could be a down season overall. Up sell Cooper and hope that someone over pays for him.

6. Marshawn Lynch, RB, Oakland Raiders: Lynch hasnt done anything from a production stand point in Oakland thus far. There are people in your league that would love to trade for him simply because he is Marshawn Lynch. If someone wants him, trade him now! Lynch still has value but that’s based more on reputation than production.

7. Demarco Murray, RB, Tennessee Titans: Murray was my keeper in a joint league I do fellow roto planner writer Jared Leonard. We drafted him in the third round  in the 2016 draft. Murray was terrific last season but he has been a major disappointment this season. We should have seen it coming. The decline began at the end of last season. The emergence of Derrick Henry didn’t help. Murray still has some value but you may have to take 50 cents on the dollar for him in a deal at this point.

8. Jarvis Landry, WR, Miami Dolphins: Landry had his best game of the season in week seven. Just like Amari Cooper, you might want to capitalize on that and trade him. Given Miami’s struggles at the quarterback position, Landry’s production will suffer the rest of the season. Dangle him out there.  You might get someone who wants to trade for him based on reputation.

9. Christian McCaffery, RB, Carolina Panthers: McCaffery has been somewhat of a dud from a fantasy standpoint this season. I would consider offering him in a package to someone who has an established back on their roster. Someone like LeSean McCoy. Either that or target a team that is falling out of playoff contention. Owners like that typically want to make trades now because they want to have fun playing fantasy football the rest of the season.

10. Rob Gronkowski, TE, New England Patriots: You could get a haul for Gronk if you are willing to move him. He has had a decent season thus far but he hasn’t been dominant. Again, another player people will over pay for in deals because of his past production.