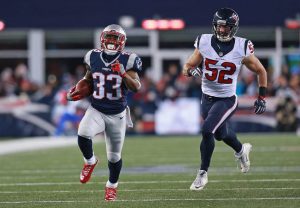 Dion Lewis is the most consistent running back on the Patriots roster from a fantasy standpoint.

Week eight is here and thanks to several teams being on a bye, there are going to be some interesting moves being made this week. Remember, we are now in the second half of the season. If you want to make a playoff push, you need to settle on a roster. Here are five guys you should consider adding and five you should drop.

1. Bengals Defense: The Bengals defense has been quietly good this season. They have averaged at least eight points in five of their six games this season in standard leagues. They have a great match up this week against a Colts offense that is putrid. If you are looking for a quality stream or even a long term solution, pick up the Bengals.

2. Dion Lewis, RB, New England Patriots: It is safe to say, Lewis is the number one back on the Patriots roster. The problem is, its the Patriots. Their running back rotation is the most inconsistent in the NFL. There is a reason Lewis is widely available in various leagues and formats. If you need a bye week filler, take a flier on him. He could be a long term fit on your roster.

3. Ju Ju Smith-Schuster, WR, Pittsburgh Steelers: With Martavis Bryant benched because of his stupidity, why not grab his potential long term replacement. Smith Schuster hasn’t put up big numbers but he seemingly finds his way into the end zone. I think he has fantasy appeal in PPR leagues, particularly 12 team leagues that offer limited value on the waiver wire.

4. Tyler Kroft, TE, Cincinnati Bengals: Kroft leads the Bengals in touchdowns and targets since week four. He has become a reliable weapon for Cincinnati in the red zone. Kroft has a terrific match up this week against a Colts secondary that is beat up and vulnerable to giving up big plays down the middle of the field to opposing tight ends.

5. DeAndre Washington and Jalen Richard, RB’s Oakland Raiders: Both backs are widely available in all leagues going into this weekend. With Marshawn Lynch suspended, Washington and Richard will see plenty of action against a Bills defense that is tough against the run. Both offer flex appeal however because of their versatility in the passing game, particularly Richard.

5A. Tennessee Titans: The Titans defense did its job last week, picking off Browns quarterbacks three times. They are on a bye this week but they have long term appeal with match-ups against the Ravens, Steelers, Bengals and Colts in the next four weeks. Keep them in mind as a potential stream option.

1. Andrew Luck, QB, Indianapolis Colts: Luck had a set back and given the way the Colts season is going, he may be shut down for the season. If you are rostering Luck, it might be time to move on. Veterans like Andy Dalton and Josh McCown are available in over 50% of leagues across all formats. Both are viable back up options and bye week fillers.

2. Martavis Bryant, WR, Pittsburgh Steelers: With Bryant in Mike Tomlin’s doghouse, it might be time to consider dropping him. He is benched this week against Detroit and his future after that remains unclear. If you can trade him, try to move him. Otherwise, look for a more reliable option on the waiver wire. Especially if you are in a ten team league.

3. Terrelle Pryor Sr. WR, Washington Redskins: I know there is some trepidation with dropping a starting caliber receiver but Pryor is the forgotten man in Washington’s offense right now. He is a non-factor. From a production standpoint, there are better options on the wire. Especially in ten team leagues. Just like Bryant, try trading him first. If not, move on.

4. Martellus Bennett, TE, Green Bay Packers: Bennett wasn’t producing when Aaron Rodgers was healthy. He certainly won’t produce now. There are plenty of quality tight ends on the wire, especially in ten team leagues. You can do better than Bennett.

5. Samaje Perine, RB, Washington Redskins: Are you done thinking that Perine is going to be this rookie revelation? He is what he is. A hybrid fullback, tail back that cannot seem to curve out a role in Washington’s offense. DROP HIM!