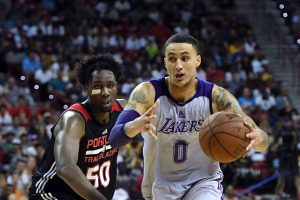 There are several quality free agents available in your fantasy basketball league. You might want to strike while the iron is hot and pick them up.

Here ten free agents you should target this week.

1. Kyle Kuzma, PF, Los Angeles Lakers: Kuzma is off to a fantastic start for the Lakers. He is averaging 14.3 points per game and 4.3 points per game. Kuzma is coming off the bench for now but he could end up starting if Julius Randle continues to struggle offensively.

2. DeMarre Carroll, SF, Brooklyn Nets: I am bullish on Nets players. The team is not very good but individually, there are player on this team that could put up quality fantasy numbers. Carroll is one of those guys. He is currently averaging 14.7 points per game and 6.7 rebounds. He has a lot more freedom in Brooklyn offensively than he did Toronto. I don’t see those numbers going down.

3. Terry Rozier, PG, Boston Celtics: With Gordon Hayward out until March, Rozier will get even more minutes off of the Celtics bench. He is currently averaging 30 minutes and 12.7 points per game. He is worth rostering and starting in deeper leagues.

4. George Hill, PG, Sacramento Kings: The veteran point guard is averaging 10.8 points per game and is playing big minutes with the Kings. If you are looking for a back up point guard who can play three to four night a week, Hill is worth grabbing right now while he is available in leagues.

5. Enes Kanter, C, New York Knicks: Kanter is only owned by 60% of fantasy players in all formats. That’s crazy considering he is averaging 18 fantasy points per game. His role in New York has been expanded offensively compared to Utah and OKC. Grab him if you need another big man. He won’t be available much longer.

6. Frank Kaminsky, C, Charlotte Hornets: Frank the Tank is taking advantage of the injuries to the Hornets front court by getting more playing time and making the most of it. He would be a worthwhile grab in DFS this week.

7. Marquese Chriss, PF, Phoenix Suns: The young power forward has a lot of upside and is getting big minutes on a bad team. You might want to grab Chriss now because he is only going to get better as the season goes on.

8. Ed Davis, PF, C, Portland Trailblazers: The veteran big man had a solid first week coming off the bench for the Blazers. Davis puts up solid numbers across the board and is a worthy play in DFS.

9. Josh Richardson, SG, SF, Miami Heat: Only owned in 10% of weekly leagues, Richardson is a must grab. He is averaging 14 points a game and playing over 30 minutes a night. Sure, he is coming off the bench, but Richardson’s production is starter worthy. He would be a terrific play in DFS.

10. Yogi Ferrell, PG, SG, Dallas Mavericks: Ferrell has played more minutes because of injuries in the Maverick backcourt and he has made the most of his opportunity. Ferrell is currently averaging 13.8 points per game and 3 assists. Those are quality numbers in any format especially DFS.