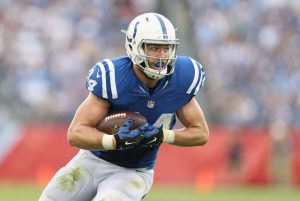 by Jared Leonard
We’re focusing on the main slate in NFL DFS. This a tough week at QB in DFS. We are going to be looking for value there and paying up at other positions.

Not many great options here this week.

Drew Brees- Always a potential for 300+ passing yards and 3 TDs. He is on the road this week, but gets to face a terrible Green Bay Defense.

Dak Prescott- Has a great matchup against a bad 49ers defense and could produce quality numbers. I am just worried that this could turn into a heavy Ezekiel Elliot game.

Marcus Mariota- Facing a bad Cleveland defense and throwing the ball is the way to beat them. We all know running the ball is a big part of Mariota’s game and with his injured leg, this makes him one dimensional.

Tyrod Taylor- I like Tyrod a lot this week. The Tampa Bay defense has a lot of injuries and has been giving up a lot of points. I think Tyrod will be able to hurt them with his duel threat abilities.

Brett Hundley- Facing a Saints defense that gives up a lot of big plays and definitely has the weapons around him to put up good numbers for his price tag. Just not sure how Green Bay will approach this game offensively with this kid at QB.

Some real good options here at all price levels.

Ezekiel Elliot- Great matchup against the 49ers. Game flow is setting up for Elliot to get a heavy workload.

Todd Gurley II– He is facing a pretty tough Arizona run defense, but I believe this guy is matchup proof and involved in all aspects of the Rams’ offense.

LeSean McCoy– This should be the week McCoy finally gets in the endzone and he should rack up huge numbers against this bad Tampa Bay defense.

CJ Anderson/Jamal Charles- The Denver running backs have a great matchup this week against a San Diego defense that gives up 150+ rushing yards per game. Just not sure which back will get the bulk of the carries.

Melvin Gordon- He has a tough matchup against a strong Denver defense, but with the amount of volume this guy gets, he always has the possibility of putting up quality numbers.

Mark Ingram- With Peterson gone, the Saints showed that Ingram is the man know and will get most of the carries. He gets to face off against a mediocre Packers’ defense and this good be another big game for Ingram.

Jordan Howard- He is the focal point of the Bears’ offense and regardless of the matchup he is going to get a lot of volume. His price tag is still too low for the caliber of player that he is.

Jay Ajayi- Miami has seemed to finally figure out that this guy needs 20+ touches per game and their offense is more effective when he gets a lot of volume. We saw what Dion Lewis was a able to do against the Jets defense last week, Ajayi should have a big game.

Carlos Hyde- I like the matchup against Dallas and has the potential to put up some quality fantasy numbers, but I don’t trust the coaching staff to use him appropriately.

Adrian Peterson- Has a great matchup against a terrible Rams’ run defense. I don’t think he will put up the points he put up last week, but he should be productive.

Ty Montgomery- In PPR formats, Montgomery could have a big game. Hundley me be throwing a lot of dump offs, which means a lot of receptions for Ty. I would only use him as a flex or in tournaments.

Joe Mixon- He is the guy now in Cincinnati and for the price, he could return great value. Plus, he has a good matchup against a weak Steelers’ run defense.

Chris Ivory- Fournette hasn’t practiced all week and why would Jacksonville risk getting him further injured. This is setting up for Ivory to get a big workload and should produce against a poor Colts’ defense if given the opportunity.

Looking to use some top options and exploit some great matchups.

Antonio Brown- Regardless of price and matchup, this guy is always in play.

AJ Green- This guy is a target monster and always has the potential to have a huge game. Dalton will look his way a lot on Sunday.

Michael Thomas- I love the matchup against Green Bay and he should have a bounce back week.

Dez Bryant- The 49ers defense is a great one to pick on and Dez could have a huge game. I wouldn’t be surprised if he gets in the endzone twice this week.

Jarvis Landry- It looks like Parker will be sidelined again and that means a ton of targets for Landry against a mediocre Jets’ secondary.

Pierre Garcon- His QB situation is not ideal, but he is far and away the best outside weapon they have and he should see a bunch of targets against a bad Cowboys’ defense.

Demaryius Thomas- Sanders will be out again this week and that means even more targets for Thomas. The Chargers’ defense is mediocre and I’m expecting big things from Thomas this week.

Eric Decker– The Titans are starting to make it a point to get him the ball more and over the last two weeks, he’s had 15 targets. This will be the week he scores his first touchdown of the season.

Robert Woods- At his price tag, you don’t need a huge day from Woods. There is no reason he can’t get at least 5 catches for 75 yards and that would be 3x value. On top of that, he’s facing a bad Arizona pass defense.

I always pay down at tight end.

Delanie Walker- Didn’t practice on Friday, so not sure if he will play. He has a great matchup against Cleveland, but I would proceed with caution.

Austin Seferian-Jenkins- He’s becoming a big part of this Jets’ offense. He will see his share of targets, but at his price tag, I’m staying away.

Jimmy Graham- Let this be known, I hate Jimmy Graham. He has been pretty useless since leaving New Orleans, just my opinion. He does have the best matchup this weekend against a Giants’ defense that has been torched by the tight end position all year.

Hunter Henry- Finally coming out of Gates’ shadow. It looks like another plus match up for him and could produce nice numbers against Denver.

Kyle Rudolph- Getting more involved with no Diggs on the field.

Jack Doyle- Love Doyle this week and he’s facing a Jaguars defense that has been beaten by the tight end this year.