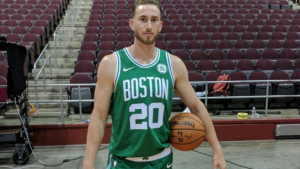 Celtics forward Gordon Hayward suffered a horrible ankle injury in the first quarter of last night’s season opener against the Cavaliers. The injury put a damper on what was otherwise a great game between the top two teams in the Eastern Conference.

If you own Hayward, you need to figure out a way to replace his across the board production in your league. It will be tough, but here three ways you can do it.

1. Use Your Two Position Players: If you are like me, you draft multi-position players that can come off your bench on off nights or serve as injury replacements. This is why I drafted D’Angelo Russell and Thaddeus Young. Both can play two positions and both players can provide me with across the board production. Having players on your roster that can play multiple positions is essential for situations like this. Of course, Hayward was a two position player so replacing him in your line up is even tougher.

2. Comb the Waiver Wire: It is early enough that there still should be quality players available in your league’s waiver wire, particularly if it is a ten team league. Replacing Hayward’s across the board production will be tough but if you can find a combo guard, forward that shoots the ball at a relatively high percentage and rebounds, you might have a comparable player. Here is a list of names that you should target on waivers.

3. Make a Trade: It is way too early for people to make trades. The season hasn’t really even gotten started yet.  You have to wait at least two weeks before you start offering people deals and even then, it is too early. Plus, if you want to replace Hayward in your line up, you are going to have to give up a lot at this juncture. You will more than likely lose out on the deal. Give it the first month of the season before you start making trade offers. Trying to orchestrate a trade now would be a panic move. Treat this situation like a real general manager would. Look at your internal options and use the waiver wire if necessary.

Losing Hayward is a big blow to the Celtics in reality and to fantasy basketball owners. Luckily for fantasy basketball owners, it is early enough in the season that a decent replacement can be found on the waiver wire. Hayward owners have to practice patience. Blowing up your entire roster over one player would be a total panic move. Stay the course. Over analyzing the situation and make an irrational move would make things worse.